While in New York for a few days recently, one of the places I had to visit was the Intrepid Air and Space Museum.  As an AvGeek, I was here mostly to see the Concorde.

Want more FreakyFlier delivered to your inbox? Sign up at the bottom of the page!

You can imagine my disappointment to discover boarding the aircraft is now not allowed. I had heard that you could go on board and look through perspex panels into the cockpit and cabin. Alas, I had to do with walking around the aircraft, yet I was still in absolute awe at this machine.

There were 14 Concorde’s built for commercial service, 7 for British Airways and 7 for Air France. This particular British Airways Concorde was registered G-BOAD and first flew in August 1976. At one point it was painted in British Airways Livery on one side and Singapore Airlines on the other. Through a joint agreement between the two airlines, they flew services between Bahrain and Singapore in the late ’70’s, however this was short lived.

G-BOAD also set the record for the fastest Atlantic crossing by a commercial aircraft. The aircraft flew between New York and London in 2 hours, 52 minutes and 59 seconds! This Concorde also flew more than any other at 23,397 hours.

The undercarriage of Concorde G-BOAD 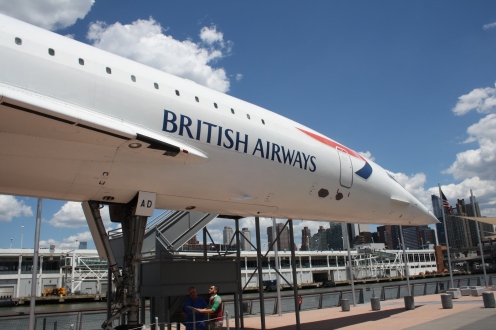 The Concorde was retired in 2003, some 3 years after the fatal crash of Air France Concorde flight AF4590. All aircraft were grounded after the incident until 11 September 2001 when the first flight took place between London and New York with British Airways staff as passengers. The aircraft landed just prior to the World Trade Center attacks that took place that day. From November that year normal commercial services from both British Airways and Air France resumed until the after effects of 9/11 and the fatal crash brought about a cessation of services. The British Airways aircraft G-BOAD was ferried by barge to the museum after its last flight in November 2003 and became incorporated into the museum in 2008. 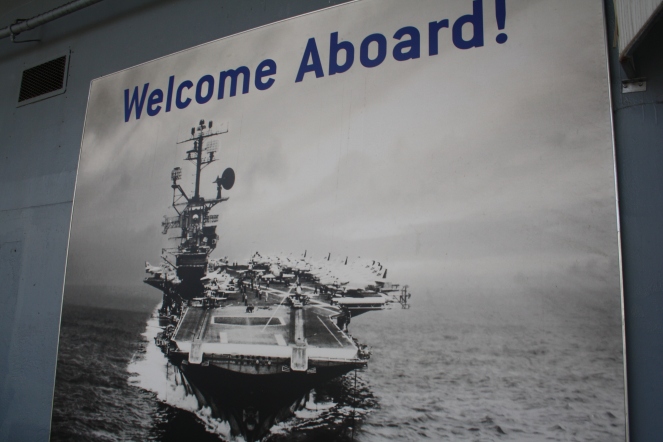 Welcome aboard the USS Intrepid 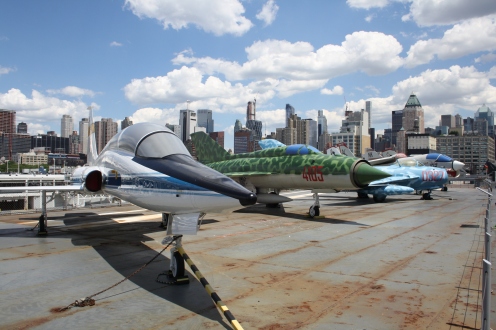 Deck of the USS Intrepid

Of course other than the Concorde, there are hundreds of exhibits for the plane spotter and and history buff in all of us. This includes a Lockheed A-12 Blackbird, which can take pictures from 80,000 feet, A Grumman F-14 Tomcat which was the aircraft type that featured in the film Top Gun plus several other interesting aircraft including the space shuttle Enterprise  which is a must see in the space shuttle pavilion. All of this on board the aircraft carrier USS Intrepid which, built in 1943 and decommissioned in 1974 is still carrying some famous historical aircraft today.

THINKING OF TRAVELLING? CLICK THE EXPEDIA LINK BELOW FOR GREAT DEALS ON AIRFARES, ACCOMMODATION AND ACTIVITIES!